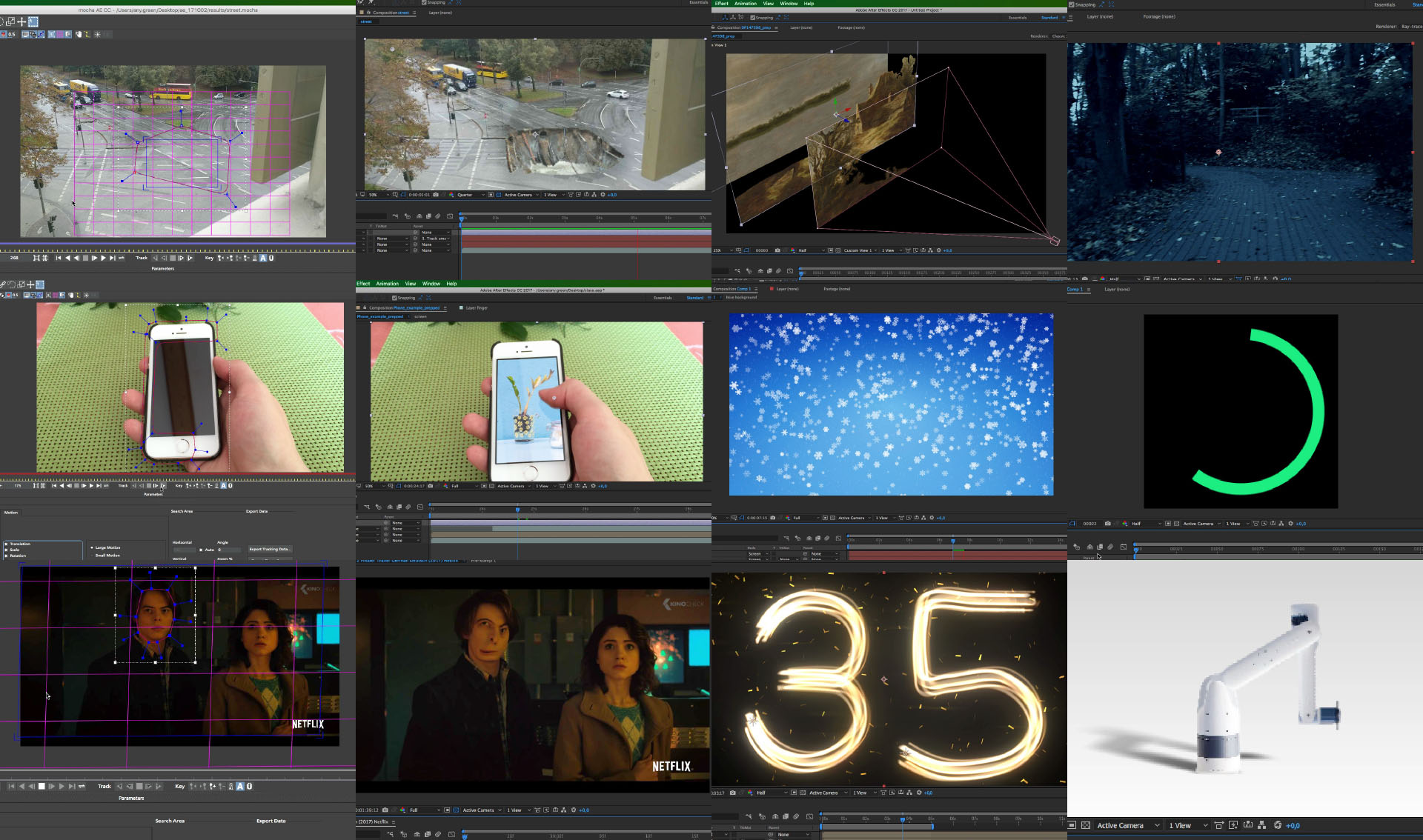 Here you will find all the recordings of the After Effects Advanced course 2017 Q4.

Tracking with mocha (hole in the street)

In this class we learned about the basics of mocha, and the different scenarios in which it makes more sense to use a planar tracker rather than the 3D Camera Tracker.
We first tracked the motion of moving cars, and then we tracked the street itself, in order add a whole that we have prepared as a still frame in Photoshop. We learned the workflow for how to replace a phone screen. Starting by fixing the source video (framerate, camera shake, noise). Then we took it over to mocha and did a planar track for the screen. After that we took the tracking back to After Effects, placed an image on the screen, and used the Roto Brush Tool to easily mask out the finger in front of the screen. Lastly we took a close look at reintroducing noise and a little bit of a blur to make the end result more believable. The class started by finishing off the phone screen replacement from the previous classes by animating the screen content based on the motion of the finger.We then talked about exporting this video from After Effects and then encoding it with the Media Encoder.
After that we talked about different animation techniques and explored how some of my scripts can help you with your animations. The last example was a loading animation based on the Android/Google loading circle.

Matte Painting, Face Tracking and distortion, the Upside Down

In this class we first talked about how we can add a 3D camera move into a painting. For that we layered the im image in Photoshop and used a small auto zoom expression to help align the layers in 3D space.
In the next example we tracked a face and distorted it.
Lastly we converted a daylight video into the Upside Down with the help of Particular and Lumetri. We took a look at three very different scenarios in which we can use the Plugin Particular.
1: Creating a graphical snow background.
2: Simulating smoke out of a car exhaustion.
3: Painting with Light.

In this class we finished the light painting example and added a confetti animation in the background (which is also created with the help of particular).
Then we explored a couple of techniques fo animating text. We used Range Selectors and Text Animators for that, as well as using each character separately from Illustrator.

Our class was used to explore some functionalities of the Plug-In called DuIK which is used for rigging.
We started with a simple example where we added some points on a tree to animate it blowing in the wind.
Then we took it a step further and animated the arm of a character.
Lastly we even rigged a robotic arm so that we only needed to animate the tip and the rest was taken care of automatically.